Subscribe to my newsletter and never miss my upcoming articles

Listen to this article

It is expressed as. So far, we have explained the basis of probability theory through an example. Now, let's graph and visualize the event that I told through a new example with software. We Will See The Theory!

In our example this time there will be a dice. We will look at the average of the numbers on this dice and to what number this average converges to. Now, let's take a dice and roll the dice 100,000 times, let's write the numbers on a piece of paper… Joke, we can start by adding libraries.

I would like to start the story with our 'number' variable While loop; We picked 100 times numbers from [1,6], and added it to the sum variable. Then our variable number of pulses was 0, we increased this variable by 100 so that we can show it in our graph. Then we divide the sum by the number of shots to our average variable and assign its mean. Finally, add the mean and number of pulses to the x and y lists.

We have repeated this about 1000 times. Then we printed it using the codes ply.plot and plot.show. We printed our lists to the console with the print commands in the upper lines. You can examine; really attracts attention.

Now we are where I am most excited; I think it's getting closer to the center of gravity! Another detail is that this point is the arithmetic mean of the numbers on the dice: 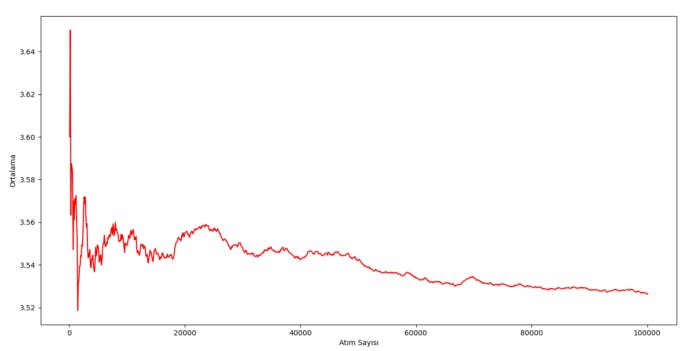 As a result, we saw that it converged to our experimental possibility. In terms of practicality, you can apply our first example of coin dumping yourself.